The 2020 Suncorp Super Netball season is set to start with a bang on 1 August with the league today confirming the fixture for the first six rounds of the condensed season that will be based out of Queensland, thanks to support from the Queensland Government.

Fittingly, to open the season, it will be a Queensland derby between the Queensland Firebirds and Sunshine Coast Lightning at Nissan Arena in Brisbane Saturday 1 August at 1pm AEST.

Later that day at 3pm AEST, GIANTS Netball and the West Coast Fever will play the first-ever Suncorp Super Netball match at the newly-updated Ken Rosewall Arena in Sydney, warming up the court for the NSW Swifts to take on the Adelaide Thunderbirds on Sunday 2 August at 1pm AEST.

Then, to close out the first round on Sunday 2 August at 5pm AEST, the two Victorian teams, the Melbourne Vixens and Collingwood Magpies, will face off during their final hours of quarantine at Nissan Arena in Brisbane.

This first phase of fixturing sees the NSW Swifts and GIANTS Netball remain at home in Sydney for their first three matches of their seasons before travelling to Queensland to join the competition hub. Pending border restrictions, it is also likely that matches will be played in Perth, Adelaide and in regional Queensland later in the season.

Taking into account state border restrictions currently in place around the nation, the Suncorp Super Netball league has elected to announce the first six rounds of 2020 action, with the next phase of fixturing expected to be confirmed in mid-August. 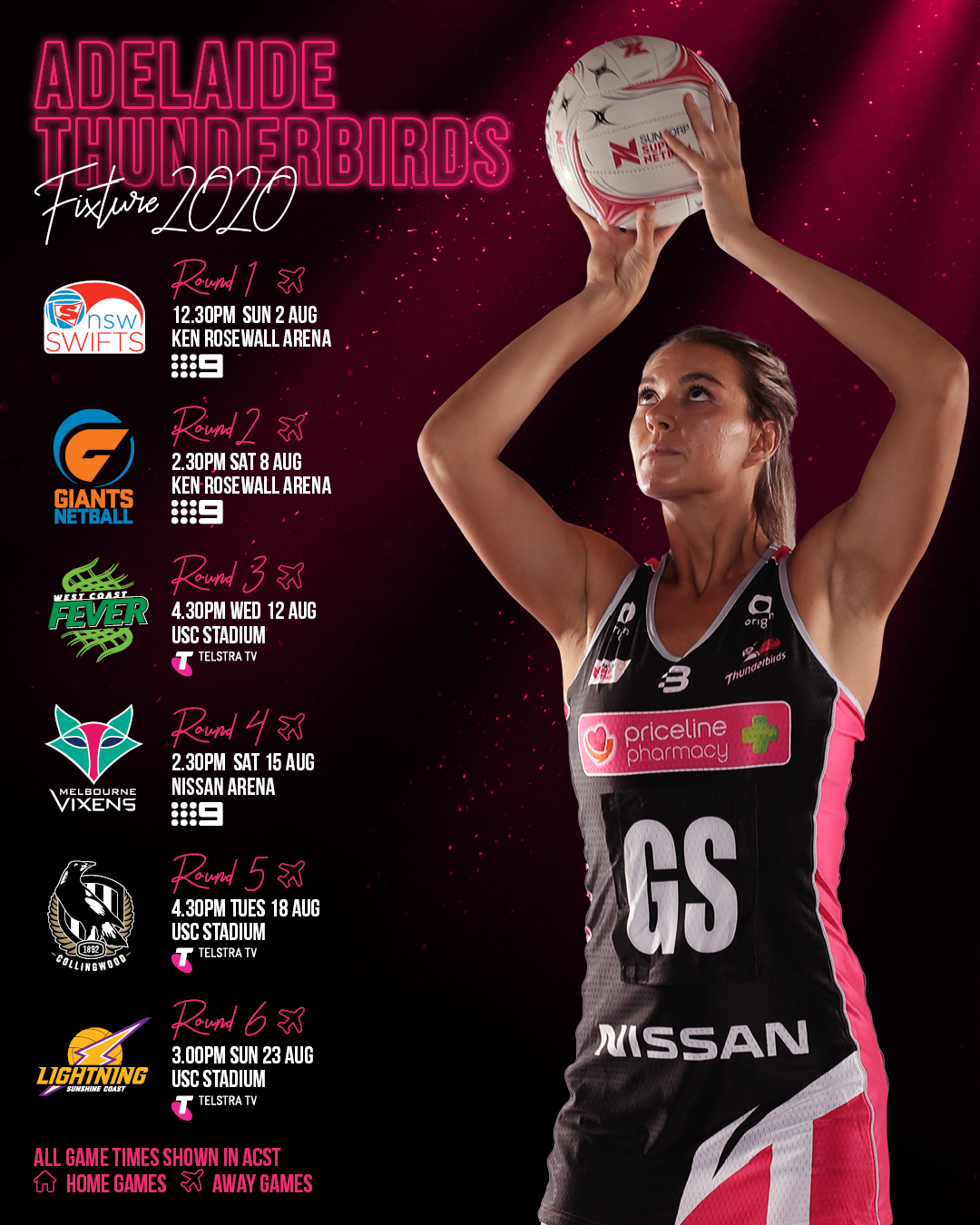 Suncorp Super Netball CEO Chris Symington said the league is pleased to have confirmed the first phase of matches and is excited to see the season get underway.

“Travel restrictions around the country have presented some substantial challenges in planning the schedule for the 2020 season, but we’ve worked closely with government and key competition stakeholders to lock in the first six weeks of action and we look forward to commencing what is going to be an enormous 14 rounds of netball,” he said.

“We understand clubs and fans would like confirmation on the entire fixture, however given the constantly-evolving COVID-19 situation we’re all facing, the league will confirm the 2020 fixture in phases to ensure the competition can remain flexible to cater for changing border restrictions as they occur.

“We understand the sacrifice that our athletes, support staff and umpires who are having to relocate are making by being away from their home and loved ones for an extended period and appreciate their willingness to do what it takes to ensure we’re able to get the 2020 season underway. We’ll continue to ensure they’re adequately supported.”

Suncorp CEO Insurance Product and Portfolio Lisa Harrison said sport has the incredible ability to bring people and communities together, and during uncertain times these connections are more important than ever.

“The decision to proceed with the league is the right one, not just for the athletes, but also for the local communities and sporting teams which rally behind them. We know the last few months have been tough for our local sporting groups, and hopefully this year’s league will once again put a spotlight on the power of community sport and the role it plays in building confidence and local connections,” she said.

All matches will be broadcast live on Nine, Telstra TV and the Netball Live Official App. Broadcast details for the first three matches can be accessed here.

Team: Two changes ahead of clash with the Swifts