Netball has been a significant part of Heather Miller's life for as long as she can remember, and as we celebrate National Volunteers Week, we're sharing her story.

She's a familiar face at Thunderbirds matches as a long-standing member of the Pink Army, but her contribution to the game spreads far and wide across several associations all over South Australia.

For 25 years, Heather has dedicated her time to growing the great game of netball, proving once again that volunteers are the lifeblood of our sport.

Here's what Heather had to say about her incredible journey:

When did you first start volunteering for the Adelaide Thunderbirds and how did you get into it?

I first started volunteering at the inception of the ANZ Championship. I worked for ANZ as a casual back then, and still do, and the opportunity arose for ANZ staff to attend Thunderbirds matches and hand out those lovely ANZ Blue Cheer sticks to make lots of noise at games. I loved meeting and greeting people at the door and handing out posters and/or cheer sticks. I was even Kevin the ATM once when the Mascot did not turn up. When it was no longer the ANZ Championship and became Suncorp Super Netball, I joined the Pink Army to continue volunteering at matches as I loved it so much.

What do you love about volunteering and being a part of the Pink Army?

I love still being involved with the game of netball at this high level, being around the players, coaches and umpires as I have been involved in netball for my whole life. I started at age 8 when I started playing and I am now 60 and still involved with mentoring beginner and Badged umpires for Tango Netball Club. Although I retired from playing at age 45, I am a ‘B’ Badged Umpire and a Development Level Coach and have been involved with Country Champs and Regional Academy Games for many years too. I was the Head Umpire for the Lower North Regional Academy for 10 years from 2005 to 2014 and was an Assistant Coach for the rezoned Northern Regional Academy in 2020 and 2021. I just love netball and love to be involved with it. 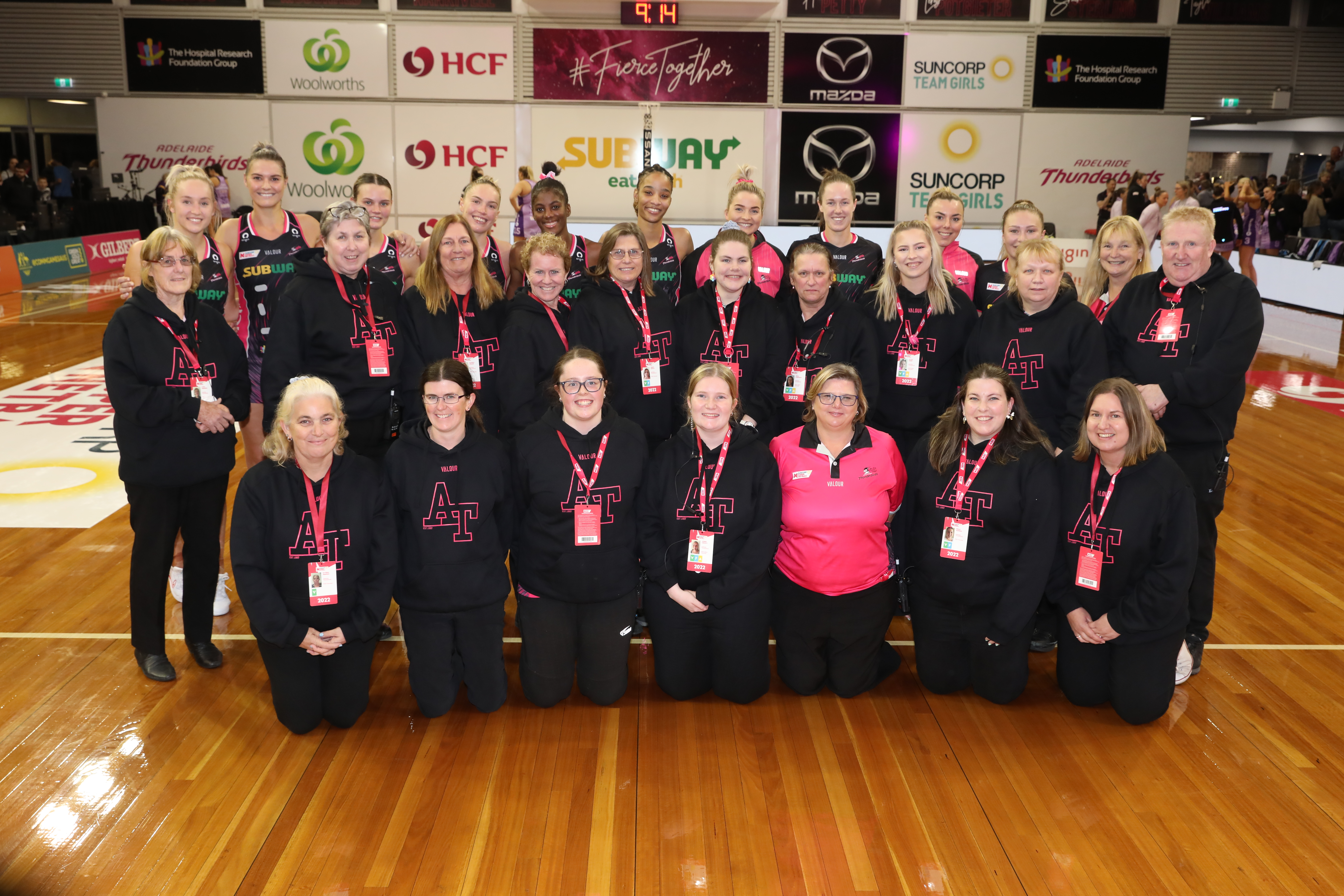 Is it right that you live in Kadina and travel to each game from there?

Yes that is correct! I live 150kms from Adelaide and have done so for 19 years. Prior to that I lived in Jamestown (which was slightly further away). My husband works for ANZ full time and we have moved around with the bank for our 30 years of marriage. I have been involved with various Netball Associations during my lifetime due to moving around and always joke about the fact that I will never be a life member anywhere due to being so transient. The travelling doesn’t bother me, you just get in the car and drive! It generally takes me just under 2 hours to get to Netball SA Stadium from my home. Our daughter lives and plays netball in Adelaide now so we always have a bed if we need one.

What are some of your favourite moments?

Obviously when the Thunderbirds won the Grand Final in 2013! That was so awesome! And another highlight was a trip to Melbourne to see a Thunderbirds v Vixens match when Michelle Den Dekker was coaching (she is a personal friend of mine) and a few Thunderbirds members travelled together to an away game, that was an amazing weekend with like-minded netball friends including my dear friend Lynda Robinson who has also volunteered with me at Thunderbirds matches for many years. This year I have been thrilled to take on new roles and have loved being the Umpire Liaison and Home Team Liaison as well as being an Usher on occasion.

Thunderbirds and Potgieter to part ways